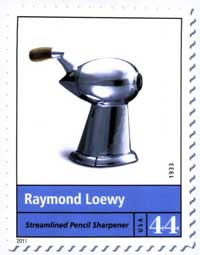 The Loewy stamp features an image of the designers’ streamlined pencil sharpener created as a prototype in 1933.  The chromium plated sharpener’s distinctive teardrop shape lent it a sense of speed and movement that belied its stationary function.

Each stamp features the name of the designer and a photograph of an object created by the designer, as well as a description of the object and the year or years when the object was created.

“Encompassing everything from furniture and electric kitchen appliances to corporate office buildings and passenger trains, the work of these designers defined the look of modern America, and in doing, revolutionized the way we live and work,” said Dean Granholm, Postal Service vice president of Delivery and Post Office Operations, at the ceremony.

Selected by Life magazine as one of the 100 most influential Americans of the 20th Century, Raymond Loewy is best known for numerous American design icons including the Coca Cola bottle, Air Force One, Lucky Strike, Greyhound Bus, Exxon and Shell logos, NASA interiors for Sky Lab and the Space Shuttle and the Avanti, the only automobile to be exhibited in the Louvre.  Companies who sought his influence included Revlon, Levis, IBM, Sakes Fifth Avenue, Bloomingdale’s, Bulova, Omega, Mont Blanc, Vogue, Koehler, Frigidaire, Formica, Rosenthal, Ford, Chrysler, Studebaker, GM, Jaguar, BMW and many others. Founded by daughter Laurence Loewy, Loewy Design was created to offer consultation to individuals and companies desiring to continue the legacy of Raymond Loewy. The Loewy Design team offers photographic and high def video production and design, web design, marketing and public relations consulting.